He embarked on the journey of making this super-effective service dog after a visually impaired Hawain woman had requested a service dog that wouldn’t trigger her husband’s allergies. Wally decided to cross-breed a standard Poodle with a Labrador after sampling this woman’s husband with different Poodle hair for allergy triggers.

The result was three puppies, of which one (Sultan), a white dog, was compatible with the man’s allergies. And so began the journey of the Labradoodle. After this experiment by Wally, different people have gone on to carry out crossbreeding exercises to populate the Labradoodle breed. 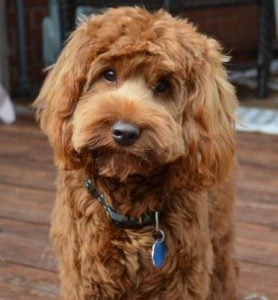 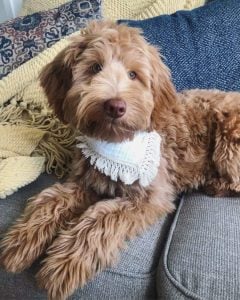 Australian Labradoodles, just like their Poodle progenitors, are covered with so much curly fur they could be mistaken for a teddy bear. Despite the density of their curly coat, they still maintain a low shedding attribute and are hypoallergenic thanks to the Poodle genes in them. They have big soulful dark brown eyes and a square-shaped nose.

Australian Labradoodles have varying shades of brown, from milky cream to dark chocolate. They can also come in Red, Gold, Black, Blue, Caramel, Chalk, Cream, Apricot, and so on. One of the main benefits of getting an Australian Labradoodle is that they all tend to have a similar coat type in a litter. There isn’t much differentiation and they tend not to shed.

Their coats are of three types:

Australian Labradoodles are very pleasant and friendly, especially around children. They are also very playful and require exercise that would keep them active. Its intelligence helps it to be easily trainable and, if undisciplined, can become a handful for the owner. It is not a noisy dog but requires physical activity to avoid boredom. According to the International Labradoodle Association, “they should display an intuition about their family members or handler’s current emotional state or needs. This ability to “know” is what has made the Australian Labradoodle an excellent dog for individuals with special needs.”

Australian Labradoodles are a hybrid breed of dogs and, as such, might not get a lot of ailments as a result of crossbreeding practices. However, this does not exclude them because they often inherit some of their parents’ health issues.

Some common health issues that Australian Labradoodles are prone to:

Choosing a size of Australian Labradoodles isn’t an arduous task as whatever size you adopt, you are bound to enjoy your relationship with them thanks to their friendliness and intelligence.

Conclusion For “What is an Australian Labradoodle”

For more content with mentions of the Australian Labradoodle, you can check out:

To learn more about this breed, watch “Australian Labradoodle – Top Things to Know About” from Dogs Now down below: