Some dog owners live by the motto that bigger dogs are better.  Other dog owner’s refuse to get a big dog because they typically shed a lot of hair that gets everywhere including your clothes, carpet, car, and every imaginable crevice.  Bigger dogs also tend to carry a lot of more dandruff which can cause severe allergy issues for some humans.  But what if you could have a big dog that doesn’t shed and is allergy free?  Yes, allergy-free big dogs that don’t shed do exist! 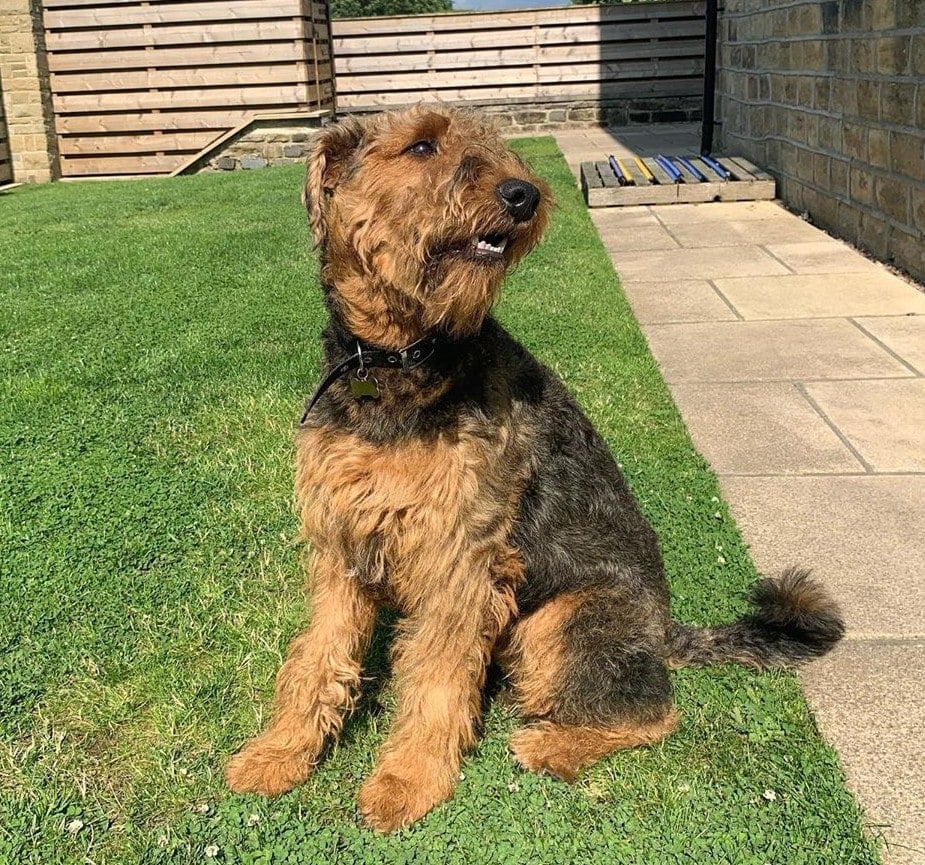 Airedale Terrier’s typically weigh somewhere between 50 to 70 pounds and are often referred to as the King of Terriers since they are the largest of the breed.  They were originally bred to catch otters and rats in the Aire of Yorkshire Valley.  Airedale Terriers can stand up to 23 inches tall and are considered an athletic hunting dog and loyal companion.  In addition, Airdale Terriers are considered able body working and sporting dogs that can compete in agility and well as hunting test. 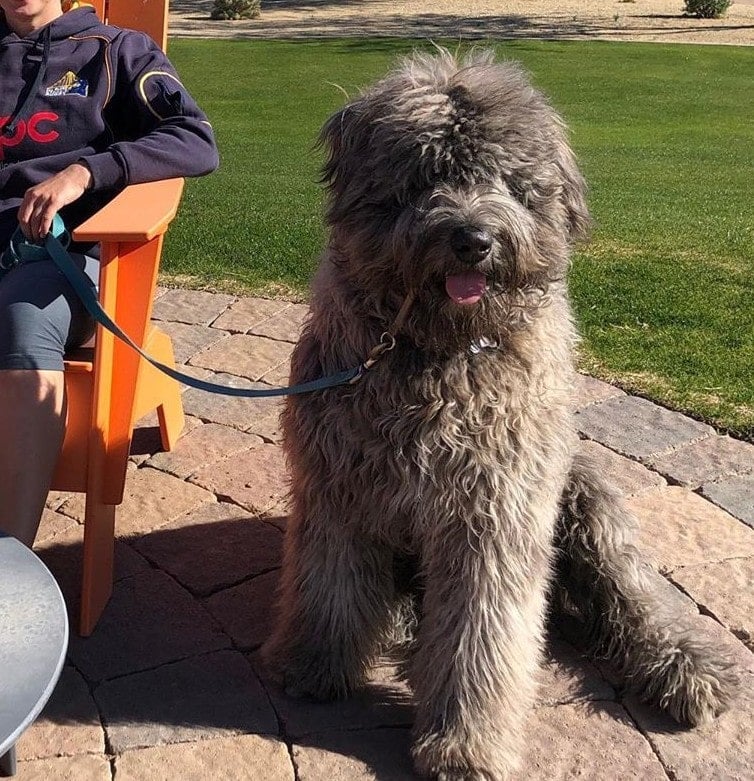 Bouvier de Flanders are big dogs weighing from 80 to 120 pounds.  They were originally bred as a herding and farming dog for sheep herding, cart pulling, and cattle driving.  Bouvier de Flanders originated in Flanders, Belgium and the name directly translates to “Cow Herder of Flanders.”  They are a powerfully built, rough coated, and make a great companion.

Due to their rough exterior coat, Bouvier de Flanders shed virtually no fur, but need to be regularly groomed at least a few times a year to maintain cleanliness and prevent matting of the fur.  Since the Bouvier de Flanders is an extremely active breed, they also require regular exercise. 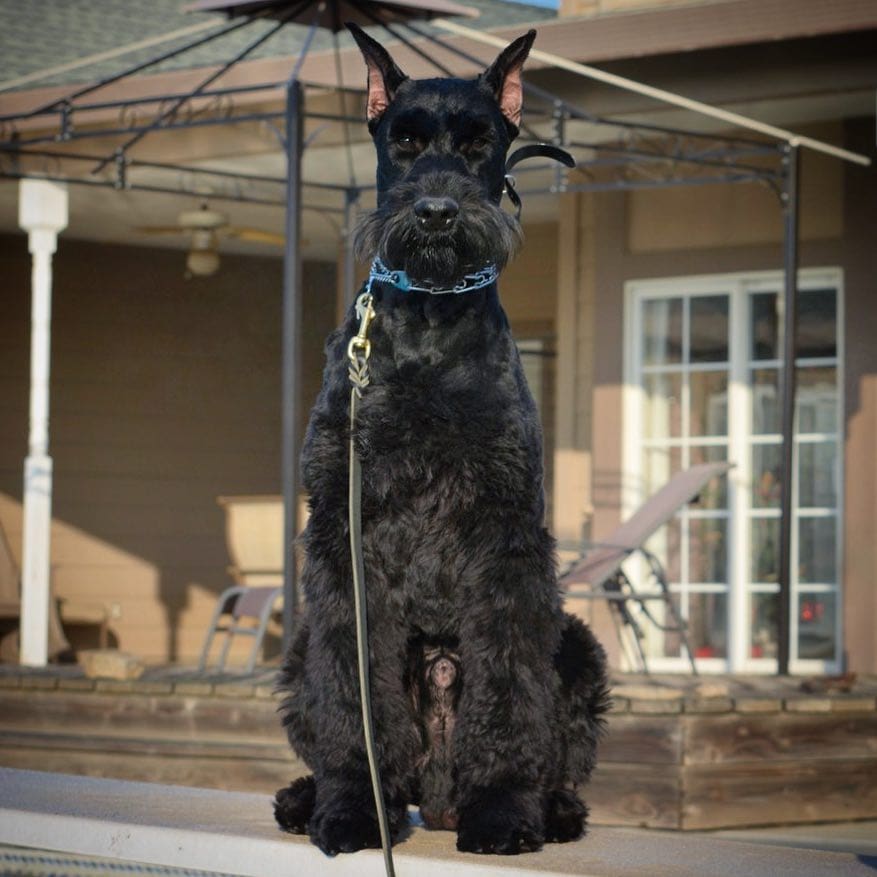 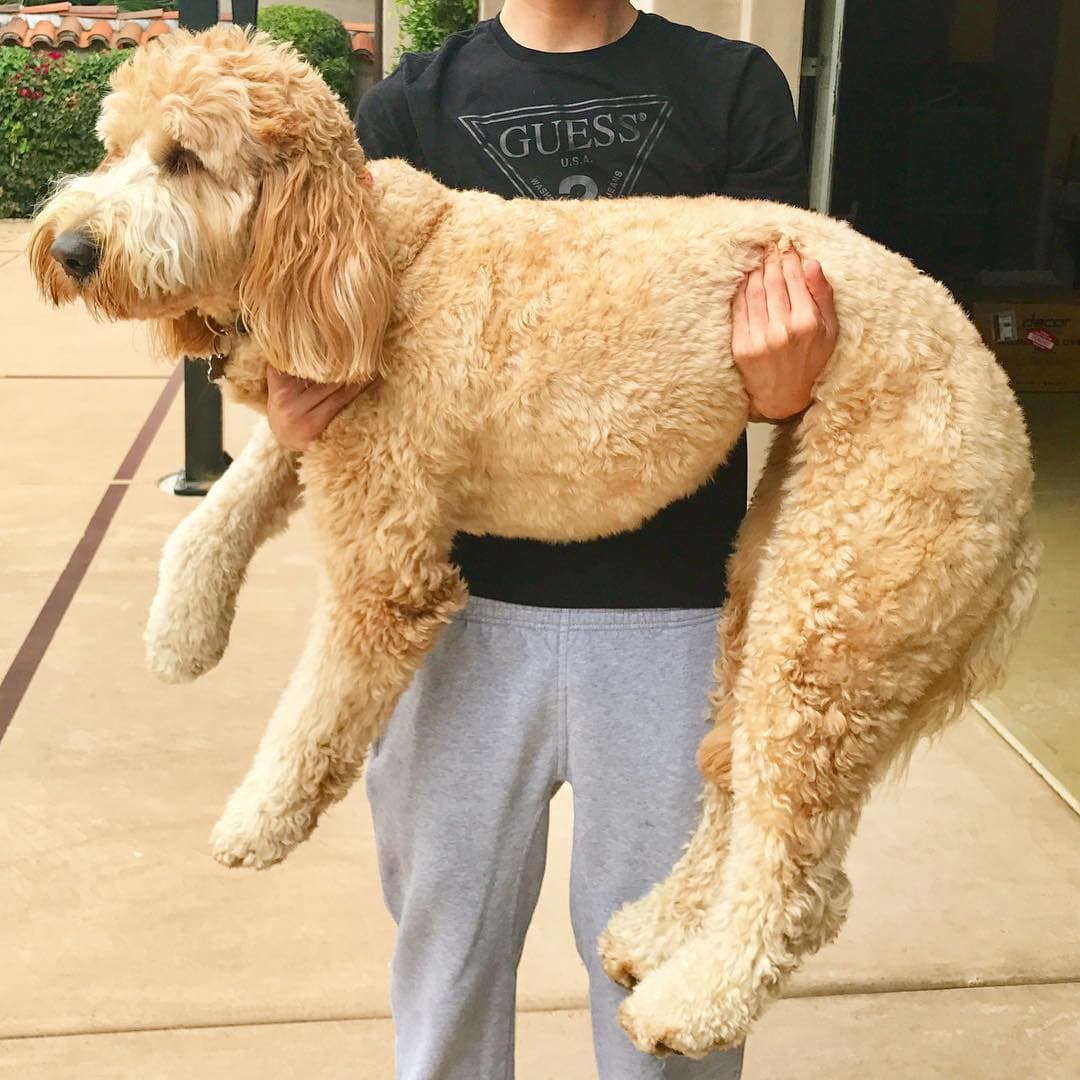 We might be biased, but the Goldendoodle is the cutest of all our big dogs that don’t shed.  Goldendoodles are a relatively new breed that is bred by mixing a Golden Retriever and a Poodle together.  Golden Retrievers typically weigh around 80 pounds (36.29 kg) while Standard Poodles weigh between 50 pounds (22.68 kg) and 70 pounds (31.75 kg).  Larger Goldendoodles can weigh between 70 pounds (31.75 kg) and 80 pounds (36.29 kg) and stand 24 inches (0.61 meters) tall.  The original purpose of breeding a Goldendoodle was to create a guide dog for allergy prone and visually impaired individuals.  They are extremely fun-loving and loyal dogs.  Every wonder what it is like to cuddle with a real life teddy bear? 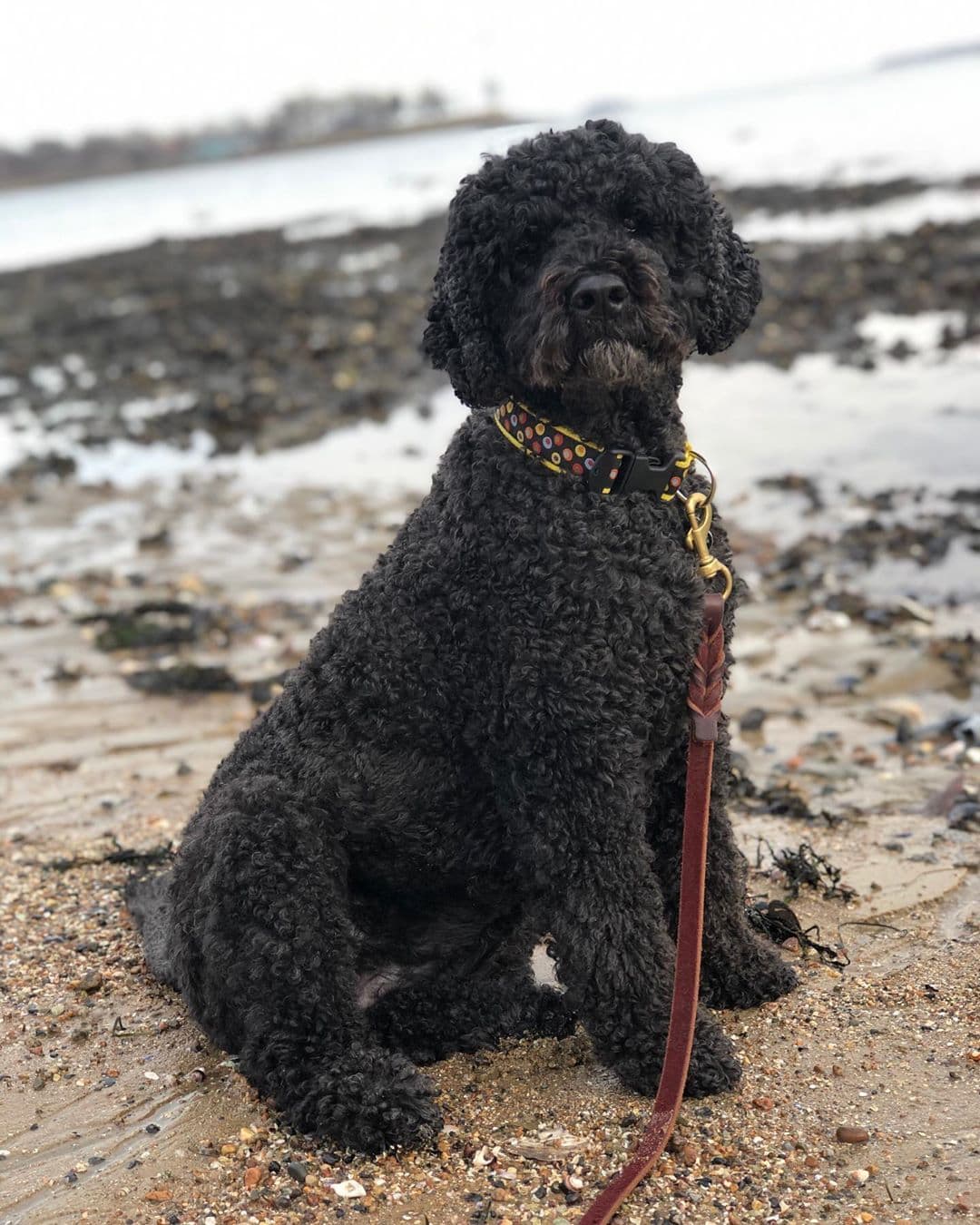 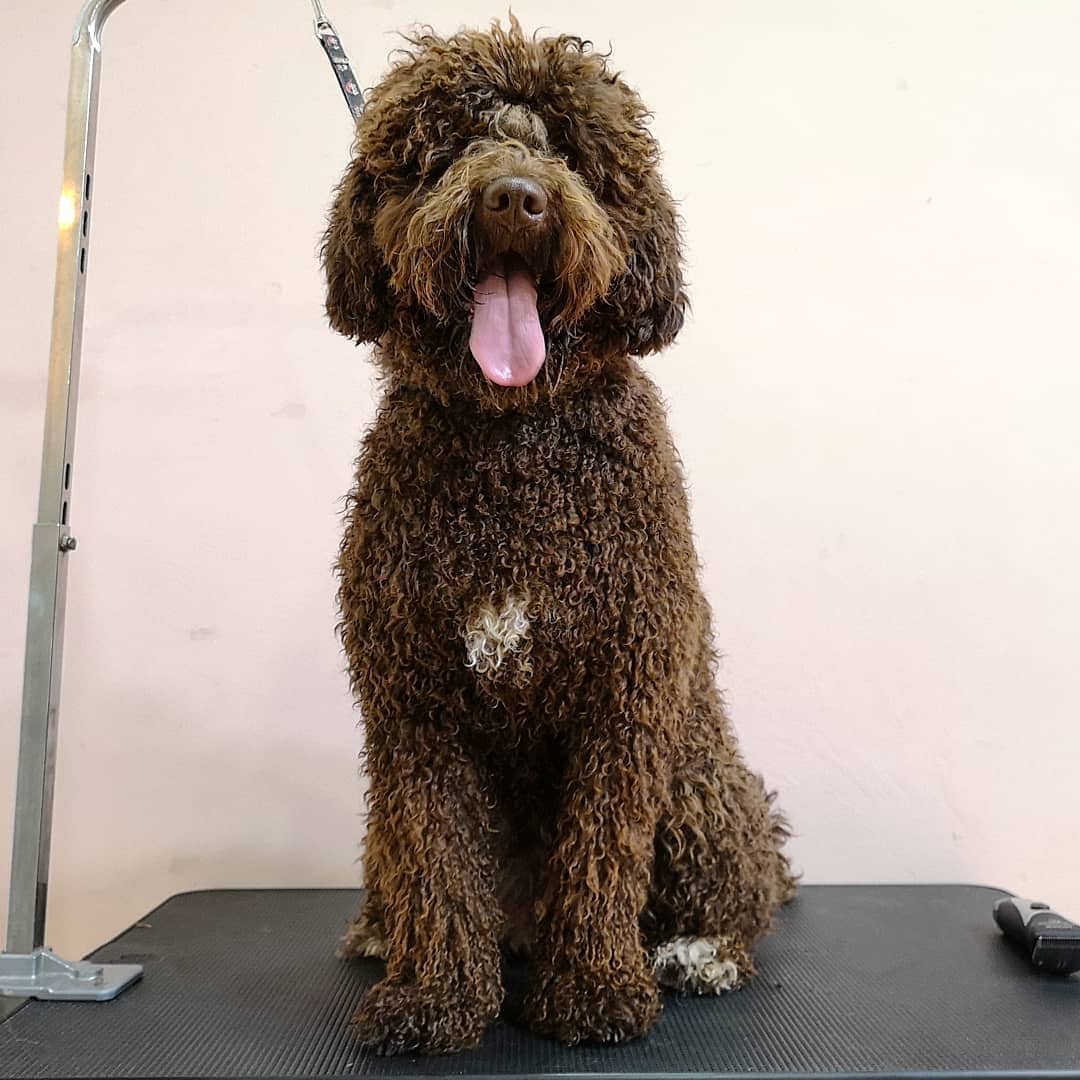 Spanish Water Dogs will get up to around 50 pounds (22.68 kg) in weight and stand around 20 inches (50.8 cm) tall.  They originated from Spain with the intent of herding sheep as well as being an all around guard dog.  The Spanish Water Dog is a big dog that doesn’t shed and loves to retrieve items from the water. 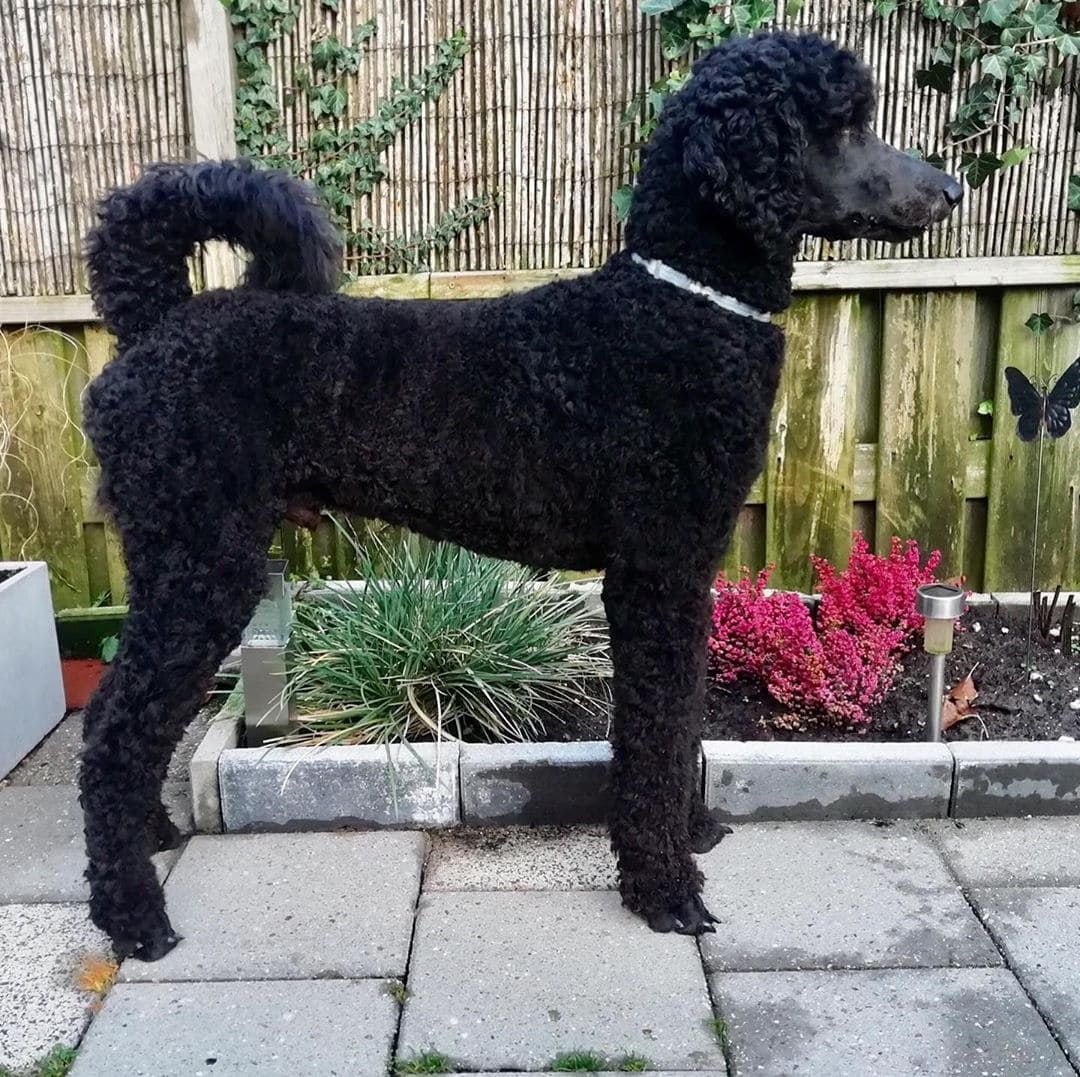 The Standard Poodle is a tall dog that can weight up to around 70 pounds (31.75 kg) and stand over 25 inches (0.64 meters) tall.  They have extremely long legs that make them “bounce” around the house or yard.  According to the AKC, Standard Poodles are one of the smartest dogs so it’s important to make sure that this big dog that doesn’t shed gets enough mental stimulation. 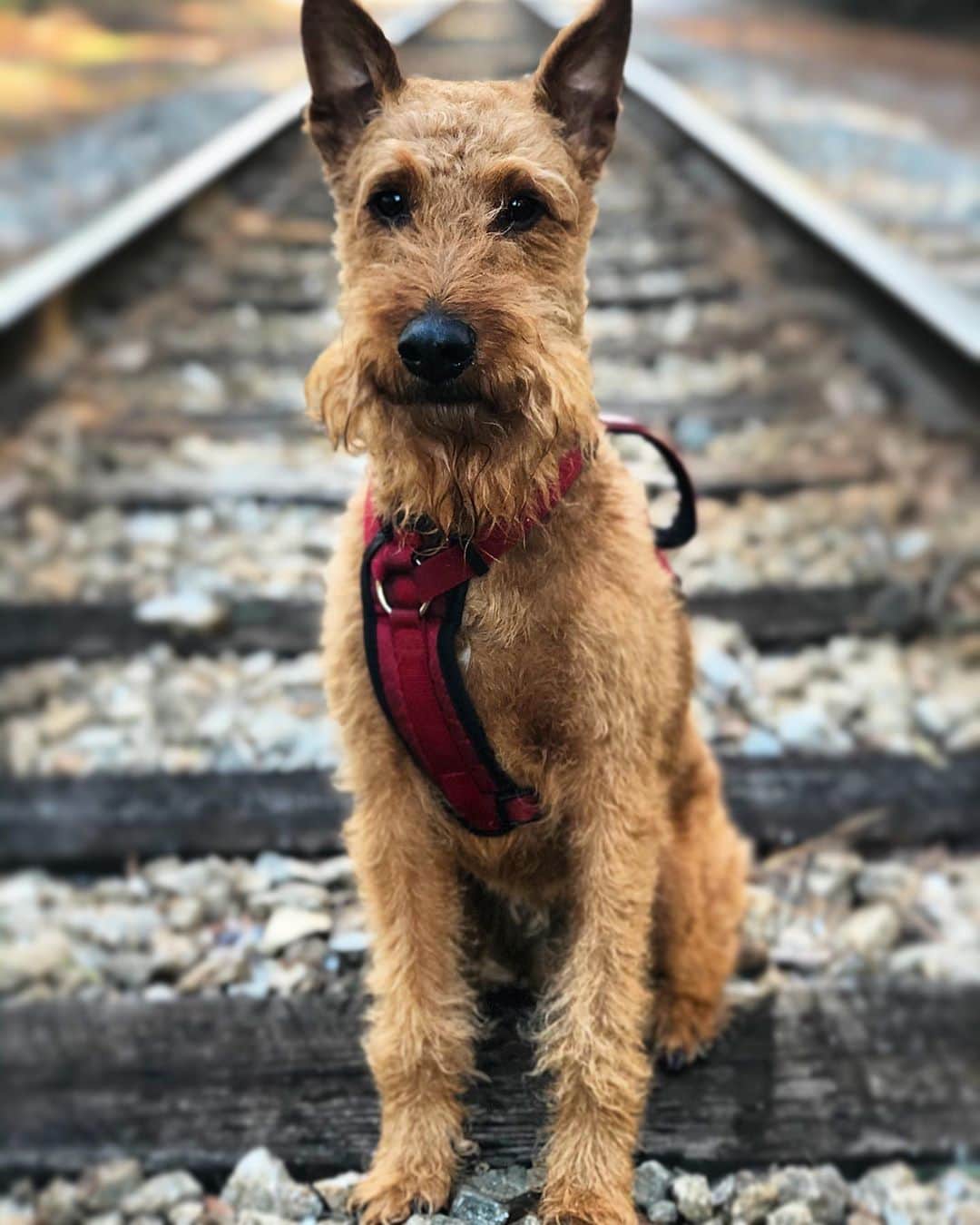 The Irish Terrier is a big dog breed from Ireland that is considered one of the oldest dog breeds in the world.  They typically weight around 50 pounds (22.68 kg) and can grow 20 inches (50.8 cm) tall.

The Irish Terrier sheds very little despite the fact that they have a double coat.  The have a somewhat coarse outer coat and shorter haired inner coat that helps to maintain their hypoallergenic feature.  Grooming is also easy, and they typically come in beautiful colors like golden red or wheat. 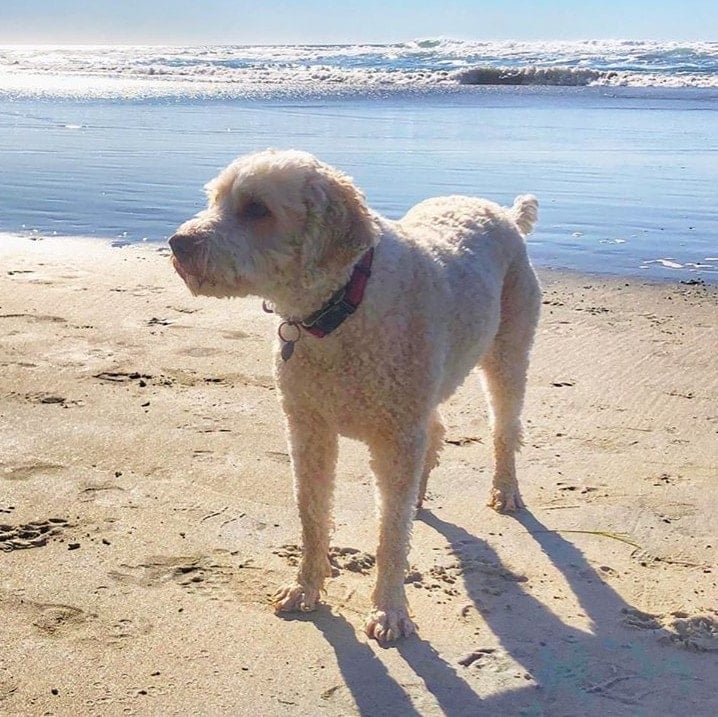 The Lagotto Romagnolo is a famous big dog that doesn’t shed.  They are used to find truffles all over the world due to their ability to smell.  Lagotto Romagnolo came from a sub region in Italy called Romagna and was originally bred as a water dog.  This dog can get over 35lbs and roughly 19 inches tall.

The Lagotto Romagnolo sheds very little hair due to its thick waterproof double coat.  Their coats are extremely fluffly and are one of the easiest to get matted so you will need to regularly groom this breed. 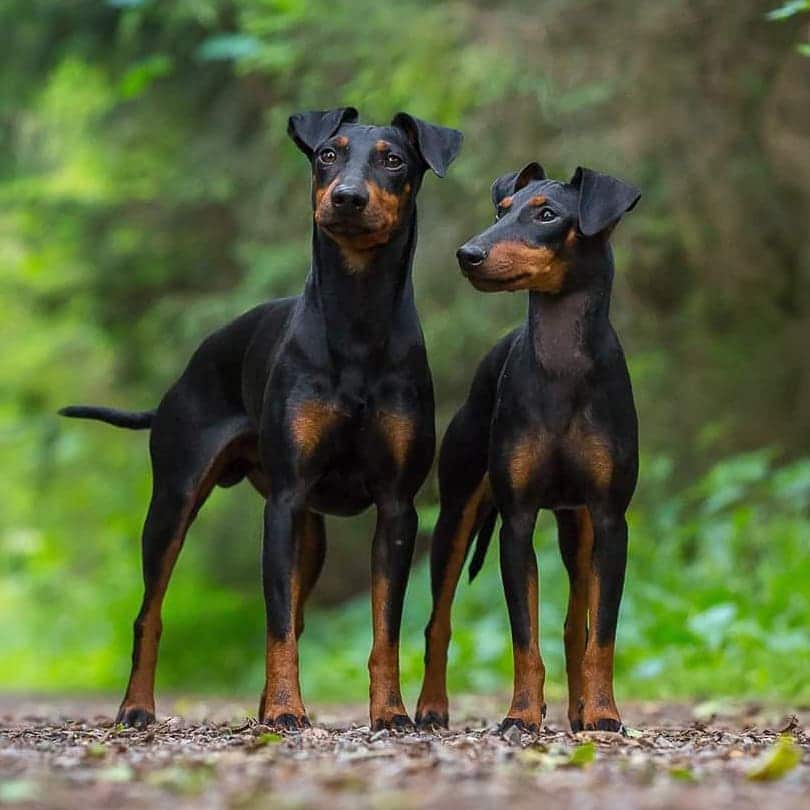 Like the other terriers, the Manchester Terrier is a medium sized dog that was bred in the 19th century to hunt rats.  You’ll often see these dogs chasing squirrels at the dog park as they are high spirited and extremely athletic.  Manchester Terrier’s are easy identified by their black and brown coats.

Manchester Terriers shed infrequently due to their short wiry hair.  They are type of dog that you simply just need to wipe down and occassionally bathe.  The downside is that these dogs are extremely active so you will likely need to give them a good walk at least a couple times a day.

Big dogs make great companions.  However, big dogs that don’t shed and are hypoallergenic make better companions!  You’ll no longer have to vacuum up dog hair  every day, lint roll your clothes out, or brush your socks off before you put your shoes on.

Other popular articles to read: