Unfortunately, the answer isn’t as straightforward as many other breeds. The good news is that if you know who your Schnoodle’s parents are, you can get a rough idea of what size they’ll get.

However, if you find a Schnoodle puppy on the side of the road or adopt one, you’re going to have to practice patience—there’s no telling how small or large it’ll be as an adult.

Before scrolling down this guide, “How Big Do Schnoodles Get,” check out these related topics: How Big Do Cavapoos Get and How Big Do Cockapoos Get?

We’ll cover the genetic reason for varying-sized Schnoodles shortly. However, if you’re on the brink of buying a Schnoodle puppy and need to know how big it’ll get right away, there are three general size ranges that the Schnoodle falls under.

People understandably get confused with the term “mini” since this is a medium-size breed for Poodles and the smallest breed for Schnauzers. But when it comes to Schnoodles, the word “mini” refers to a medium-size dog.

Mini Schnoodles range from 12 to 15 inches in height and weigh 13 to 20 pounds. They’re the result of a standard Schnauzer mixing with a mini Poodle. 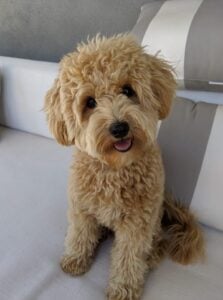 Toy Schnoodles reach a mere 10 to 12 inches in height and weigh only six to ten pounds. As you probably guessed, this breed originates from a mini Schnauzer mating with a toy Poodle.

Based on this Schnoodle height and weight ranges, you can see some overlap, particularly with the height. Therefore, if you bring home a toy Schnoodle, it could end up growing into the size of a small mini Schnoodle, and vice versa.

Related: When is a Schnoodle Full Grown?

Schnoodles are a dog breed that involves a mix of one Schnauzer parent and one Poodle parent. While this crossbreed produces an adorable, loving dog, the problem is that there are three different sizes within the Schnauzer and Poodle breeds. They are as follows.

As you saw above, breeding a giant Schnauzer with a standard Poodle will result in a larger Schnoodle than breeding a Mini Schnauzer and Toy Poodle.

Related: How Long Do Schnoodles Live? 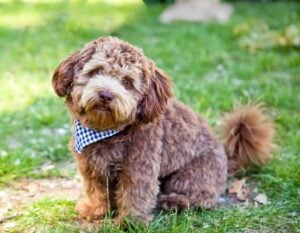 If the variations we’ve already discussed feel like enough of a reason for you to scratch your head over how big your Schnoodle might get, there’s another factor to consider—your puppy’s generation and the size of its Poodle and Schnauzer descendants.

Breeders created rather scientific names to identify the generation of a Schnoodle. As a result, knowing your Schnoodle’s generation will help you determine how big it may get. Examples of these sizes include:

As a general rule, F1 Schnoodles cost more because they’re first-generation, and people prize them for being purer.

How Genetics Influence a Schnoodle Size

We’ve all heard comments about a child being born to parents with entirely different hair or eye color and people joking how they couldn’t be a product of that parent. Well, the same can happen with Schnoodles.

Genetics don’t always follow what shows up on paper, and your puppy may grow into an adult that varies in size from what you and your breeder expected.

The reason is that within their three size categories, Schnauzers run larger than Poodles. Therefore, if your Schnoodle’s genes decided to inherit more of its Schnauzer parent, it could run on the large side.

How Do I Know My Schnoodle Stopped Growing? 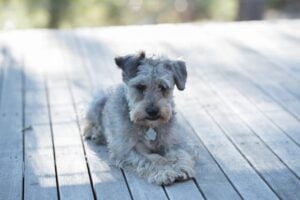 If you’re holding your breath about how large your Schnoodle will get or how small it will stay, the good news is that you can let out what is hopefully a sigh of relief after a certain period. That said, the amount of time it’ll take your Schnoodle to grow depends on its size category. The breakdown looks like this:

Puppies grow at a fast rate during their first weeks of life. Therefore, by the time they reach four months, you can estimate approximately 40% more growth remaining. As you can imagine, it’s more challenging to determine how much your adult Schnoodle will end up weighing.

However, you should make sure your Schnoodle gets plenty of exercises and that you give it a balanced diet according to your veterinarian’s recommendations to help it achieve a healthy weight.

Conclusion For “How Big Do Schnoodles Get”

If you want to bring a Schnoodle puppy home and prefer it to remain within a specific size, you must work with a breeder. Not only will high-quality breeders have information about the puppy’s parents, but they’ll also know the background of how large or small the Schnauzers and Poodles run in the parents’ bloodlines.

Finally, if you happen to bring home a Schnoodle you found on the side of the street, the chances are high that it will be on the small side; breeders tend to favor using mini Schnauzers and toy Poodles for breeding since they’re in such high demand.

If this article, “How Big Do Schnoodles Get,” helped you, then these like:

You can learn more about the Schnoodle and its sizes by watching “Schnoodle Dogs 101 – 10 Facts About Schnoodles Designer Dogs” down below: