Many myths and misconceptions lead to people wondering: “Are Rottweilers good dogs?” Whether you decide to buy or adopt a dog, a Rottweiler might not be one of the first options that come to mind. Often, people associate Rottweiler dogs with violence and aggressiveness. However, with the proper care and upbringing, Rottweilers are the best pets you can ever have.

Affectionately known as Rotties or Rotts, the Rottweiler breed originally belongs to Germany. Initially, Rottweilers were intended to drive cattle and pull carts for butchers and farmers. Later, they were employed by the police force and continue to serve in the military as well. Our team at WeLoveDoodles compiled all the information you need to understand whether Rottweilers are good dogs or not.

Before scrolling down the guide, we think you might be interested in other Rottweiler articles: Are Rottweilers Dangerous and Why Is My Rottweiler Growling? 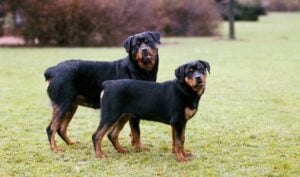 Rottweilers are typically characterized as strong, sturdy, have a robust muscular body, and a broad chest. Nevertheless, a Rottweiler’s comprehensive structure should not be mistaken for being aggressive. If they are well-bred and raised in the right circumstances, a Rottweiler is one of the calmest, confident, and loving breeds you will find. Rottweilers are highly protective of their family members and usually act aloof around strangers or people they are not familiar with.

Rottweilers walk a fine line between being aggressive versus being protective. If they are not bred and raised correctly, socialized with other people and animals, and trained correctly, then it will not be long before your Rottweiler starts to act violently. Additionally, a Rottweiler that lacks the capability of distinguishing and identifying dangerous situations is not safe for anyone it encounters.

As impressive as Rottweilers are, they are not the dog for everyone. Unlike many dogs, Rottweilers require constant attention and training to be raised like a regular pet. Moreover, due to the various perceptions and myths surrounding Rottweilers, particularly the widely held belief that they are violent, you might need to deal with many judgments regarding the breed and its behavior. 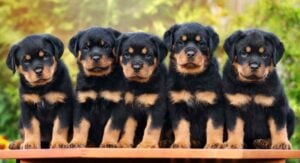 Despite what you may have commonly heard, Rottweilers are not naturally unsound, neither do they incline aggression or harm. Well-bred and properly socialized Rottweilers are playful, friendly, and gentle towards their families and other people. Here are some essential facts you need to know about them:

When the name ‘Rottweiler’ comes to mind, one of the first adjectives associated with it is violence. Or aggression. Rottweilers are infamous for being dogs that have violent tendencies. Unfortunately, many incidents have taken place where a Rottweiler has either attacked or bitten an individual or another animal. As a result, some areas have banned people from keeping Rottweilers at home.

Let’s understand some of the misconceptions and myths surrounding the Rottweiler:

Rottweiler-Related Article: How To Put Ear Drops in Uncooperative Dog.

Conclusion For “Are Rottweilers Good Dogs” 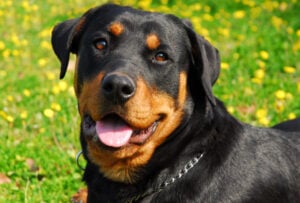 As mentioned earlier, if bred and brought up in a suitable environment, Rottweilers will grow up to be friendly and pleasant dogs, highly affectionate and protective towards their family members. It cannot be denied that a Rottweiler cannot be belligerent. However, like many dogs, if left to fend for themselves, neglected, or abandoned, a Rottweiler will turn hostile and show signs of anger in no time. And it would not be too long before your Rottweiler begins to attack either your family or another animal or human being.

Ordinarily, Rottweilers behave violently with dogs of other breeds, usually those of the same gender. Though most Rottweilers co-exist happily with a pet cat at home, there can be certain instances where they can turn predatory towards the family cat. To prevent a problematic situation from arising in the future, it is best if you extensively train and socialize your Rottweiler from an early age, preferably from its puppyhood days. An important point to keep in mind is that Rottweilers have a wide range of temperaments and usually struggle for dominance with their owner.

Any Rottweiler owner must first understand the temperament of its pet and have a disciplined schedule so that the pet can understand who the boss or leader is. Do not forget to take your dog out for brisk walks, stretch, and interactive romping sessions to get your pet accustomed to other dogs and people. Ensure that if you are getting a Rottweiler as a pet, make sure you have the time and patience to take care of it and train it. For those who do not have the time or want a dog that does not require a lot of training, a Rottweiler may not be the right pet for them.

For articles with mentions of the Rottweiler dog breed, check out:

To learn more about the Rottweiler dog breed, watch “Are Rottweilers Dangerous or Loyal Companions” from Dog Breeds FAQ Channel down below: